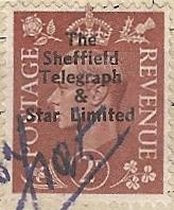 The Star, often known as the Sheffield Star is a daily newspaper published in Sheffield, England, from Monday to Saturday each week. Originally a broadsheet, the newspaper became a tabloid in 1989. The Star, the weekly Sheffield Telegraph and the Green 'Un are published by Sheffield Newspapers Ltd (owned by Johnston Press), based at York Street in Sheffield City Centre.

The newspaper which subsequently became The Star began as the Sheffield Evening Telegraph, the first edition of which was published on 7 June 1887. It soon took over its only local rival, the Sheffield Evening Star, and from June 1888 to December 1897 it was known as the Evening Telegraph and Star and Sheffield Daily Times, then from 1898 to October 1937 as the Yorkshire Telegraph and Star. In 1931, it took over the Sheffield Mail, which had been its main rival since 1920. From 1937 to November 1938, the newspaper became the Telegraph & Star, and finally, from 14 November 1938, The Star. 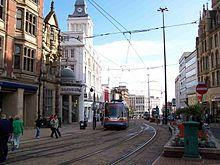 Looking down High Street from near its junction with Fargate, the Star and Telegraph building is on the left.

Johnston Press began printing The Star at their new £60 million printing plant in Dinnington, near Rotherham, in September 2006. The plant includes the first 'triple width' newspaper press in the UK. The plant also prints not only several other Johnston Press titles, including the Sheffield Telegraph, Scarborough Evening News, Wakefield Express, Derbyshire Times, and Chesterfield Advertiser, but also a number of external publications, including The Sun and News of the World for News International.

by Paul Green
Posted by Michael Behm at 8:27 AM