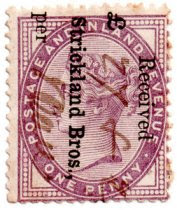 George Strickland founded a business as a seed and corn merchant in Hastings in c1804. He initially seems to have dealt mainly in fruit, vegetables, and general provisions, and may have had a market garden. George was succeeded by his son Edmund, who also traded as a coal merchant in Hastings. Edmund expanded the corn and seed business to Hailsham, and had premises in the railway yard, which were built around 1860. Edmund's sons, George, William, and Edmund, became involved in the Hailsham side of the business, which became known as Strickland Brothers.

Strickland Brothers was incorporated in 1899 as Stricklands Limited. The other business in Hastings was run by Edmund's youngest son, Francis, and it later became known as F. Strickland & Sons Ltd. This company expanded into the seed potato business during the 1920s. A factory in Hastings was established for the manufacture of compound animal feeds.

In 1960, Stricklands Ltd. and F. Struckland & Sons Ltd. were merged into one family business. From 1967, the company was concerned primarily with a chain of retail garden and pet shops. F. Strickland & Sons Ltd. traded until 1992, when the shops were sold off, bar one trading under the Strickland name in St. Leonards on Sea, although there was no family connection.

by Mark Matlach
Posted by Michael Behm at 10:35 AM