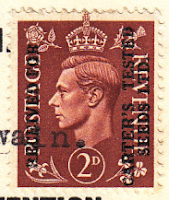 Carters Tested Seeds was a company of seed and grain merchants, established in 1804 in High Holborn, London, with the initial trading name of James Carter, Dunnet & Beale. In 1879 the company registered its first trademark "Trocadero - Carters Grass Seeds", for agricultural and horticultural seeds.

In 1910 the business was moved from High Holborn to Raynes Park in South West London. Magnificent new headquarters were built, along with glass houses, seed trial gardens and packing and mailing premises. Carters established a nursery at nearby Perry Hill, which grew into one of the first bedding-plant nurseries of the day. The nursery had six span-roofed houses, each 150 feet long and 20 feet wide, in each of which 100,000 bedding-plants could be arranged in different stages of growth. Over 100 staff were employed to maintain the nursery. In 1930 the business went public with the trading name of Carters Tested Seeds Limited. 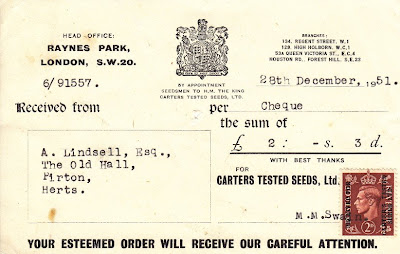 In 2008 Carters Tested Seeds Limited was taken over by Vilmorin, an international company which is the largest packet seed distributor in the world.

It is likely (but not certain) that the first of the three overprints above is from the company that would come to be known as Carters Tested Seeds. The third overprint is on SG573.
Posted by Michael Behm at 9:59 AM