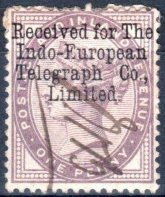 On 11 January 1868, Nasáer-al-Din Shah granted the Siemens brothers a concession to build and operate a telegraph from Tehran to the Russian frontier at Jolfa. The agreement stipulated that, after 25 years, the entire line would default to the Iranian government unless overridden by a subsequent agreement.

In January 1891, the IETC extended their concession with Persia through 1925. The Persian government had previously built a rudimentary telegraph connecting Tehran and Tabriz, but used the Siemens concession to upgrade the link at no cost to itself. Robert Murdoch Smith, director of the IETD Persian section, wrote in an 1868 letter, "The Tabreez line has been very bad of late of course, the Iranians will do nothing to it in anticipation of Siemens taking it over".

Contemporaries frequently confused the IETC and IETD, leading Frederic Goldsmid, IETD director from 1865-71, to pen a clarification letter to The Times of London published 7 February 1870. The British government initially welcomed the IETC for the communications security an additional Indo-European telegraph route would provide. However, the IETC line fell under the protection of Russian authorities, even if most of its directors were English.

The IETC 480-mile double wire line opened in August 1869 for both Iranian and foreign traffic, although the IETC did not complete the route via Tiflis, Odessa, Warsaw, Thorn, Berlin, Emden, and Lowestoft to London until January 1870. The commencement of IETC operations shortened Indo-European communications from 12 days to just over six minutes. Increased traffic to Tehran via the IETC route spurred growth on the IETD system in the rest of Iran so as to accommodate traffic onward from Iran to India.

Beginning in 1912, the IETC sought to transform its Iranian operations into a wireless company, though this was interrupted by the outbreak of World War I, which cut off IETC service; it did not resume until August 1923.

By Paul Green
Posted by Michael Behm at 6:01 AM