The Times is a daily national newspaper in the UK. It is generally regarded as a serious publication with high standards of journalism. The paper is the originator of the ubiquitous Times Roman typeface, originally developed for its legibility in low-tech printing. The Times currently has a daily circulation of 502,000 copies.

The Times was founded by John Walter on 1st January 1785 as the Daily Universal Register, with Walter in the role of editor. Walter changed the title after 940 editions on 1st January 1788 to The Times. The newspaper was to remain in the hands of John Walter's family for the next 120 years. The Times used contributions from significant figures in the fields of politics, science, literature and the arts, to build up its reputation. For much of its early life, the profits of The Times were very large and the competition minimal, so it could pay far better than its rivals for information or writers.

In 1817 Thomas Barnes became general editor. Under his stewardship and that of his successor, J.T. Delane, the influence of The Times rose to great heights, especially in politics and amongst the City of London. The Times was the first newspaper to send war correspondents to cover particular conflicts. W.H. Russell, the paper's correspondent with the army in the Crimean War, was immensely influential with his dispatches back to England.

Since 1981 The Times has been owned by Rupert Murdoch's News International. Murdoch quickly introduced new technology and efficiency measures. The Linotype printing process which had been used to print The Times since the 19th Century, was phased out and replaced by computer-input and photo-composition. This allowed the printing staff to be reduced by half. The Times had been printed in broadsheet format for 219 years but switched to tabloid size in 2004 partly in an attempt to appeal to younger readers and partly to appeal to commuters using public transport. 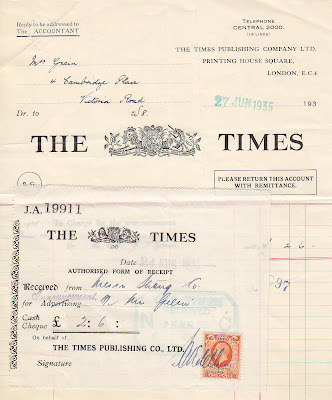 The Times used commercial overprints from at least SG 421 to SG 543bd. There are three patterns over that period, which have small differences in font and spacing.
Posted by Michael Behm at 5:25 PM