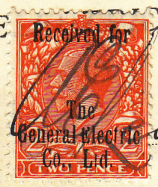 The General Electric Company (GEC) was a major British company involved in consumer and defence electronics, communications, and engineering.

GEC traces its origins to G. Binswanger & Co., an electrical goods wholesaler established in London during the 1880s by a German immigrant named Gustav Binswanger. In 1886 Binswanger was joined by fellow immigrant Hugo Hirst and the company name was changed to The General Electric Apparatus Company. The firm established a factory in Salford and began manufacturing telephones, electric bells, ceiling roses, and switches. 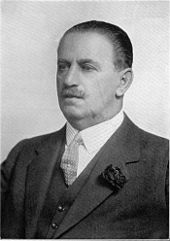 Hugo Hirst
In 1889 the business became General Electric Company Limited. The firm was expanding rapidly, opening new branches and factories and trading in "Everything Electrical", a phrase that was to become synonymous with GEC. In 1893 GEC decided to invest in lamp manufacture. The company led the way in lamp design and the burgeoning demand for electric lighting was to make GEC's fortune. In 1902 GEC's first purpose-built factory, the Witton Engineering Works, was opened near Birmingham. 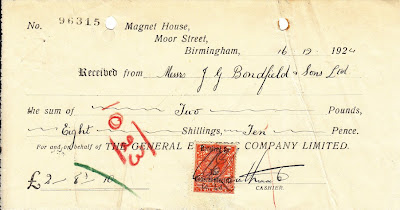 The outbreak of The First World War transformed GEC into a major player in the electronics industry. The company was heavily involved in the war effort, with products such as radios and signal lamps. During The Second World War, GEC was a major supplier to the military of electrical and engineering products. GEC continued to expand after the War and by 1983 the company had become Britain's largest private employer, with about 250,000 employees.

GEC was renamed Marconi Corporation Limited in 1999 after its defense arm was sold to British Aerospace. In 2005 Ericsson purchased the bulk of Marconi and the remaining businesses were renamed Telent.

There were at least three different General Electric overprints spanning the years from SG 421 to SG 518. The center stamp above is a rare combination of a commercial overprint and a perfin.
Posted by Michael Behm at 8:01 AM