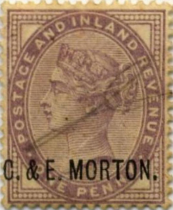 John Thomas Morton went into business as a provision merchant in Aberdeen in 1849, subsequently building up a large trade in the export of canned and other preserved foods. The Millwall factory was opened about 1872 at the former oil works of Price &; Company; later expansion included the opening of a herring cannery at Lowestoft and a depot in Cubitt Town.

After Morton's death in 1897, the business was run by his sons. C. & E. Morton Ltd, as the firm became, was for many years among the largest local employers. Millwall Football Club originated with a team formed by workers at Mortons in 1885. The company's main trade was overseas. It supplied food to the Polar expeditions led by Shackleton and Scott, and was one of the principal suppliers of canned food to the armed forces during the First World War. After the war Mortons lost ground to foreign and colonial competitors and had to turn to the home market.

Best known for jam, the factory also produced a variety of processed foods and confections, including jelly, caramel, chocolate, custard, marsh mallow, liquorice and fondants, as well as Seidlitz powder, magnesia and Epsom salts. In 1945 the company was taken over by the Beecham Group and the Mortons business was concentrated at Lowestoft, producing canned vegetables and fruit fillings. The Millwall works were gradually run down.

By Paul Green
Posted by Michael Behm at 10:24 AM