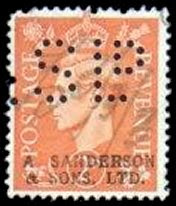 In 1860 Arthur Sanderson establishes himself in Islington, London, as an importer of French wallpapers. Merchandise features expensive, luxurious wallpapers, such as the panoramic and imitation-leather papers manufactured by Paul Balin of Paris, for whom Sanderson is the sole agent in England. Two years later Arthur moves the company to Soho Square, the company company is soon becoming known as one of the largest dealers in foreign goods in England.

1865 sees Sanderson moving to nearby 52 Berners Street. The firm continues to lease and develop showroom space along the street, remaining there until 1992. Sets of wallpaper for use below dado rail, as filling above it, with a frieze at the top become one of the eras key decorating aesthetics.

During 1879 Sanderson acquires land at Chiswick and builds a wallpaper factory, thireteen years later its significantly enlarged in height to four stories. 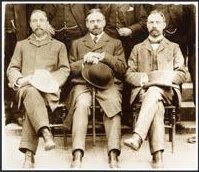 1886 Japanese papers begin to be imported; within a few years papers are also being imported from Germany. The building boom in Britain greatly increases the demand for affordable wallpapers.

By 1895 Sanderson has the largest wallpaper show room in the country.

1899 sees Sanderson’s Chiswick factory join the Wall Paper Manufacturers Ltd (WPM), a joint stock combination intended to achieve a monopoly on wallpaper production. The WPM soon controls 98 per cent of the trade. By this period Sanderson is exporting to the British colonies and the USA.

1924: Arthur Bengough Sanderson becomes the holder of a Royal Warrant as Purveyor of Wallpapers and Paints to King George V. This is said to be the first Warrant granted for the supply of these products.

1930: A new wallpaper factory is completed at Perivale. On a site covering eighty acres and with extensive facilities for sporting and social events, it is said to be the finest in the world and remains in company hands until 1973.

1951: Sanderson products appear in the Festival of Britain on London’s South Bank, where the Royal Festival Hall is decorated exclusively with the company’s papers. Imported textiles are introduced; among the fabrics are those with designs by Picasso and Gio Ponti. Royal Warrants are granted to the firm in 1951 and 1955.

1985: The company celebrates its 125th anniversary with a revamped showroom and an exhibition. WestPoint Pepperell, Inc. of Georgia, USA, purchases Sanderson from Reed International. 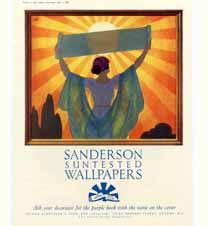 1989: WestPoint Pepperell is aggressively acquired by Farley Industries: in the following year Sanderson is sold to the largest textile manufacturer in the Netherlands, Gamma Holdings NV.

2000: In August, Sanderson’s new headquarters are established in Denham; seven months later, in March 2001, there is a management buyout.

2003: In August, Sanderson goes into receivership; three weeks later it is purchased by Walker Greenbank Plc.

2004: Walker Greenbank invests heavily in product development and almost two years’ worth of collections are launched in the second half of that year, culminating in the return of new Options collections in January 2005.

2010: In March Sanderson celebrates its 150th anniversary with a special collection of fabrics and wallpapers inspired by its archive, a three month-long exhibition at the Fashion and Textile Museum, London and a coffee table book written by Mary Schoeser and published by Thames & Hudson. 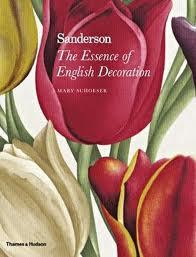 Sanderson is the oldest surviving English brand name in its field.

By Paul Green
Posted by Michael Behm at 4:05 AM