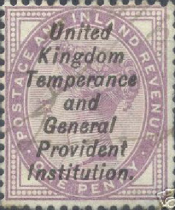 The UK Total Abstinence Life was formed in London in 1840 and, as the name suggests, its products were aimed initially at teetotalers. The group grew and expanded gradually, changing its name to the United Kingdom Temperance & General Provident Institution in 1849. Later this was shortened to the United Kingdom Provident Institution, with the head office moving out of London to Salisbury in 1975.

The operational merger with Friends’ Provident Life Office came in 1986, with the funds of the two organizations formally merged in 1993.

By Paul Green
Posted by Michael Behm at 5:15 AM