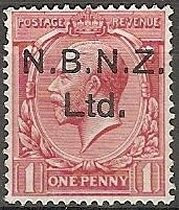 NBNZ was founded in London in 1872 as an overseas bank and shared many directors with Lloyds Bank. During 1919, Lloyds Bank acquired a small interest in NBNZ but it took until 1966 for Lloyds to purchase NBNZ outright. National Bank and the Bank of New Zealand established joint data processing services, which they combined as Databank Systems Limited in 1967.

Throughout much of its history, the National Bank has provided banking services to mainly rural, personal, and small business customers. Its owner is ANZ National Bank Limited, the New Zealand subsidiary of Australia and New Zealand Banking Group. ANZ purchased it in 2003 from Lloyds TSB.

The National Bank's distinctive Black Horse logo dates back to 1677 London when Humphrey Stockes adopted it as sign for his shop. Stokes was a goldsmith and 'keeper of the running cashes', an early term for banker. When Lloyds Bank took over the site in 1884, it retained the horse as its symbol. The Black Horse became the symbol of the National Bank of New Zealand in 1978 when the bank transferred its Head Office from London to New Zealand. When ANZ bought NBNZ, it also bought the right to continue to use the Black Horse logo for seven years.

By Paul Green
Posted by Michael Behm at 5:29 AM