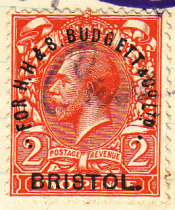 The company was begun c1820 when Samuel Budgett became a partner of his half-brother Henry Hill Budgett, in the latter's small shop in Kingswood, Bristol. Samuel had a passion for trading. He introduced the practice of buying in bulk and delivering to other small shops like his own. He trained a group of traveling salesmen who would visit potential clients outside the Bristol area. The business grew rapidly and in time reached as far as Birmingham and Penzance. A warehouse and new houses for Budgett employees were built in Kingswood.

In 1842 Henry retired, leaving Samuel in sole charge of the company. Soon afterwards, Samuel set up an additional business as a tea wholesaler in London. When he died in 1851, Samuel's son took control of of both the tea trade in London and the original business in Bristol under the original name of H. H. & S Budgett & Co.

Samuel died in 1851, leaving a strong and vigorous business in the hands of an excellent workforce and a family willing and able to continue along the same lines as before.

On 21 July 1898, the company became a limited company. H. H. and S. Budgett (Limited), with a share capital of £150,000, divided into 15,000 5% Cumulative Preference shares and 15,000 Ordinary Shares of £5 each had been formed to take over the old firm--Messrs. H. H. and S. Budgett and Co. Wholesale grocers and drysalters of Nelson Street, Bristol--under the existing management. 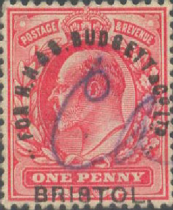 At the 1920 AGM, the chairman (W. E. Budgett) said they had been acquiring other companies that fitted well and they now covered the country from Newcastle-upon-Tyne to Lands End. Turnover had multiplied many times but much of the benefit had been taken by the Government in Excess Profits Tax.

Budgetts were taken over in 1961 by Scribbans-Kemp. They continued, still with family members on the board but gradually declined as a business under the relentless pressure of the supermarkets. Although they changed to some extent: opening Cash & Carry Warehouses for retailers and buying retail shops themselves, they had failed to seize a strong position in the supermarket trade at an early stage and consequently were perhaps bound to fail in the long run. 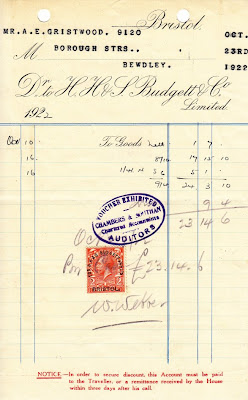 By 1977 Budgetts, together with Oakeshotts, had been sold for "almost £5m" but it is not clear to whom.

Budgetts began as a small shop in 1820, lost its autonomy 140 years later in 1961 and probably disappeared completely in 1977 after 157 years, a long record by any standard.

By Mark Matlach and Paul Green
Posted by Michael Behm at 5:47 AM