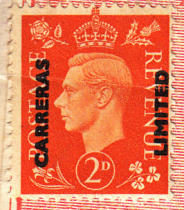 Carreras Ltd. was a tobacco business that was established in London in the 19th century by Don José Carreras Ferrer, a nobleman from Spain.

During the early years of the 19th century, Carreras began trading in London at a time when cigars were increasing in popularity, and Don José became a pioneer in his field. However, although the business prospered, it did not become a major concern until his son, Don José Joaquin, began to specialise in the blending of tobaccos and snuff. By 1852 Don José Joaquin Carreras had established himself near Leicester Square, and in 1853 was granted a warrant as the sole supplier of cigars and tobacco to the Spanish Legation in London. His fame as a skilled tobacco blender soon spread, and he produced special blends to suit the individual tastes of the highest members of society, with fashionable and distinguished customers visiting his showroom to select their own tobaccos. Some of Don José's tobacco brands, such as Craven Mixture and Guard's Mixture, became world famous. Over 1000 brands of cigar could be bought from Carreras, together with snuffs, cigarettes, and pipes.

The business continued to expand and in 1903 Carreras became a public company. In 1904 Carreras introduced the Black Cat cigarettes, which were one of the first machine-made cigarettes to be manufactured in Britain, and went on to become Carreras' best selling brand. 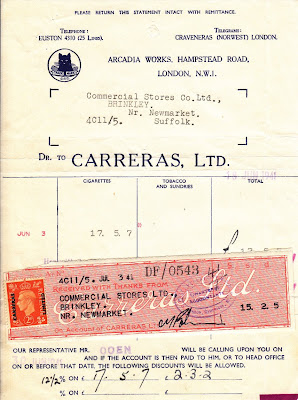 Carreras Ltd. continued as an independent company until November 1958 when it merged with Rothmans of Pall Mall. Carreras Rothmans Ltd. was formed in 1972, when Carreras Ltd. was used as the vehicle for the merger of various European tobacco interests to form Rothmans International.

By Mark Matlach
Carreras overprints appears on issues from at least SG421 to SG543. There are font differences between the first three stamps shown below.