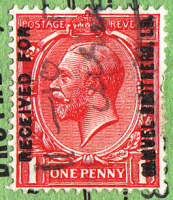 Samuel Brothers are clothing retailers and manufacturers who specialise in making military uniforms.

The business was established in 1830 in London as a garment manufacturer and livery company. Samuel Brothers had shops in Piccadilly and later in Ludgate Hill, and a factory in Leeds. The company became well regarded as a boys' outfitters, supplying made to measure school uniforms. However, it was best known for manufacturing uniforms for the defense and civil forces. The firm also made a wide range of sportswear such as golfing, fishing, and cycling suits. 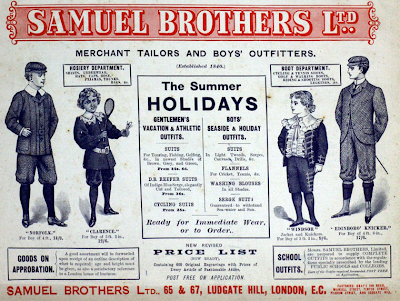 In 1993 Samuel Brothers moved to Deepcut, Surrey and in 2007 another manufacturing unit was opened in Harwich. The company continues to specialise in making uniforms for the military as well as uniforms for hotel staff and airline workers. Some notable clients that are currently being supplied by Samuel Brothers include: Royal Logistic Corps, Royal Corps of Signals, The Scots Guards, Surrey Fire and Rescue Services, and the Royal Thames Yacht Club. 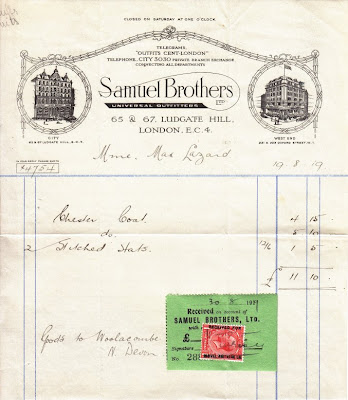 By Mark Matlach
Posted by Michael Behm at 7:43 AM