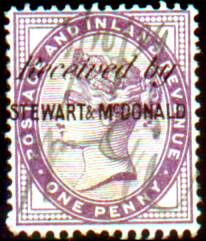 Stewart & McDonald was established by Robertson Buchanan Stewart and John MacDonald in 1826 as a small wholesale drapery warehouse in Glasgow, Scotland. Hugh Fraser, later of Arthur & Fraser, retailers, Glasgow, had previously been a lace buyer to Stewart & McDonald and rose to be a manager in 1849.

Alexander Stewart died in 1880 and was succeeded as a partner by the founder's grandson John R. Stewart, and later, in 1882, by Robert Keddie, manager of several of the principal departments. Robert Keddie initiated the establishment of several supply factories and the improvement of the shop frontage on Buchanan Street, Glasgow.

McDonalds Ltd. was made a public limited liability company on 25 August 1920, and in 1922, acquired the business of E. J. Clarke, Harrogate, Yorkshire, England, a family drapery business.
In April 1951, the business was purchased by House of Fraser Ltd., department store retailers in Glasgow. The business continued as a subsidiary of House of Fraser Ltd until 1966 when it was merged with Wylie & Lochhead Ltd., a neighbouring furnishing store, acquired by House of Fraser Ltd. in 1957. Together the stores traded as McDonalds, Wylie & Lochhead. In 1975 this merger was taken a stage further by the amalgamation of the shops Fraser Sons & Co. and McDonalds, Wylie & Lochhead as a single department store, Frasers, on the west side of Buchanan Street, Glasgow. The site of the store still existed in 2002.

By Paul Green
The name in the overprint at the top of this post is STEWART & MCDONALD; after roughly 1894 the name was written as STEWART & M'DONALD, a practice that continued to at least 1912. 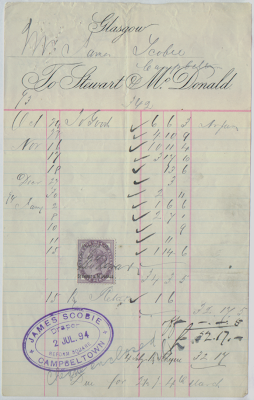