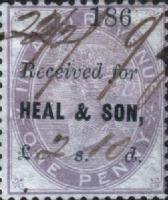 The original Heal's business was established in 1810 by John Harris Heal and his son Ambrose Heal, who worked in the company as craftsman, designer, and finally Chairman from 1893 to 1953.

Originally a bed-making firm, Heal's was run as a family business designing, manufacturing and selling furniture, applied arts, interior decorating and household goods until 1983. The business has subsequently been in a number of ownerships trading as a retailer.

Heal developed his business as a design, manufacturing and retail concern in accord with the philosophy of which he was a key proponent. 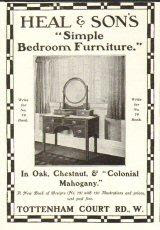 Heal’s has operated since its foundation in the Tottenham Court Road, and from the present site since 1840. Its first purpose-built store, completed in 1854, was then one of the largest in London.

A second store was opened in Guildford in 1972 and the Company remained highly profitable until the mid 1970s, when it began to suffer losses, principally in the non-retail businesses.

The company was acquired by Storehouse plc in 1983; after this acquisition, the number of trading activities were reduced and the Company operated only as a retailer.

In 1984 Heal’s was expanded to five stores from the original two. In the recession of the late 1980s the business again incurred losses and, after shrinking back to the two original stores, the company was the subject of a management buyout.

The buyout became effective in September 1990 ending a 7-year period in the Storehouse group of companies.

In the second half of the nineties, Heal’s started to expand and develop, opening a new store on King’s Road Chelsea in 1995 and floating the company on the London Stock Exchange in 1997. In 1998, a new store was opened in Kingston, London. In November 2000, Heal's launched an ecommerce website www.heals.co.uk.

By Paul Green
There are a variety of Heal overprints, from the 1860s to the early years of the 20th century. Strangely, the later issues appear to be more scarce.