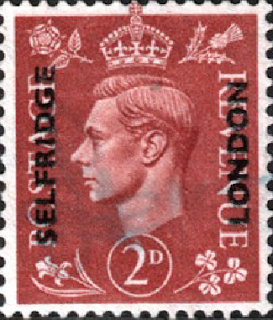 Selfridges, also known as Selfridges & Co., is a chain of high-end department stores in the United Kingdom. It was founded by Harry Gordon Selfridge. The flagship store in London's Oxford Street is the second largest shop in the UK (after Harrods) and was opened on 15 March 1909. More recently, three other stores have been opened; in Trafford, Greater Manchester (1998), in Manchester City Centre's Exchange Square (2002) and in the Bullring, Birmingham (2003). For 14 years, the store belonged to Liverpool's now-defunct Lewis's retail group.

Gordon Selfridge was born in 1858 in Ripon, Wisconsin, and in 1879 joined Field, Leiter and Company (later to become Marshall Field & Company), where he worked for the famous Chicago retailer. He worked his way up through the firm, married into the prominent Buckingham family, and amassed the fortune with which he built his new London store.

Selfridge's innovative marketing led to his success. He tried to make shopping a fun adventure instead of a chore. He put merchandise on display so customers could examine it, put the highly profitable perfume counter front-and-centre on the ground floor, and established policies that made it safe and easy for customers to shop — techniques that have been adopted by modern department stores the world over.

Either Selfridge or Marshall Field is popularly held to have coined the phrase "the customer is always right", and he did use it regularly in his extensive advertising.

He attracted shoppers with educational and scientific exhibits. He was himself interested in education and science, and believed that the displays would introduce potential new customers to Selfridges, generating both immediate and long-term sales.

In 1909, after the first cross-Channel flight, Louis Blériot's monoplane was exhibited at Selfridges, where it was seen by 12,000 people. The first public demonstration of television was by John Logie Baird from the first floor of Selfridges from 1–27 April 1925.

The provincial stores were sold to the John Lewis Partnership in the 1940s. The remaining Oxford Street store was acquired in 1951 by the Liverpool-based Lewis's chain of department stores, which was in turn taken over in 1965 by the Sears Group owned by Charles Clore. In March 1998 Selfridges had acquired a new logo, at use to the present, which came in tandem with the opening of the Manchester Trafford Centre store and Selfridges demerger from Sears. 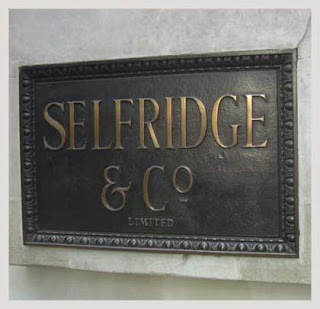 In 2003, the chain was acquired by Canada's Galen Weston for £598 million. Weston, a retailing expert who is the owner of department store chains such as Holt Renfrew and Brown Thomas as well as major supermarket chains in Canada, has chosen to invest in renovation of the Oxford Street store, rather than to carry out planned expansion to Leeds, Newcastle Upon Tyne, Bristol, and Glasgow, despite Selfridges owning a site in the latter city.

By Paul Green
Posted by Michael Behm at 12:22 PM