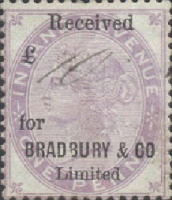 A well-cited account states that in 1852, George Bradbury worked as a skilled machinist at Platt Brothers Engineering Company in Oldham, Lancashire. At that time, his employers were involved in an industrial dispute that resulted in the loss of an order to produce machines somewhat akin to the earliest heavyweight American designs.

Bradbury, together with fellow colleague Thomas Sugden, decided to tender for the work themselves, and were subsequently awarded a contract. A small workshop at Primrose Bank was established, and Bradbury's first machines were soon completed.

The business prospered, and by 1861 larger premises at Rhodes Bank were taken. The workforce then numbered 17 men and 6 boys.

In 1864 advertisements showed three distinct models types on and to keep pace with demand an even larger factory was needed, and in 1866 construction of the famous Wellington Works commenced in Wellington Street, Oldham.

1867 saw a Wheeler Wilson clone known as "The Adjustable Belgravia" enter the range. Primarily aimed at the expanding domestic market, this model probably benefited the company more than any other in their catalogue during the 1870s. The Belgravia boasted no less than "21 important advantages" over basic Wheeler Wilson machines. Combinations ranging from simple treadles to ornate elaborate cabinets were available, with prices from 7 to 20 guineas respectively.

Records reveal that the workforce totaled 244 in 1871. The famous Duke of Wellington trademark was introduced in the mid 1870s. A serpentine hand lockstitch machine named the "Wellington" features this trademark.

During this period of great expansion, Thomas Sugden continued to play a vital role in the business, together with former Platt Brothers "old boy" Thomas Chadwick, who had joined Bradbury in 1864. Both widely employed their considerable skills within the business. Chadwick became joint managing director with Bradbury in 1874, following the firm's transition from a private concern to a limited company.

The business continued to expand and prosper for several decades, aided not only by newer sewing machine designs, but also other branches of light engineering manufacture. The Bradbury name became synonymous with quality items in areas such as bassinettes, mail carts, and cycles, and by the turn of the century, motorcycles. The business finally ceased trading in 1924.