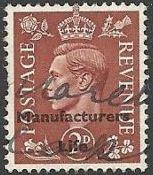 The Manufacturers Life Insurance Company was founded in 1887. Its first president was the first Prime Minister of Canada, Sir John A. Macdonald. In 1897, Manulife Financial expanded its operations into Asia, including China and Hong Kong. 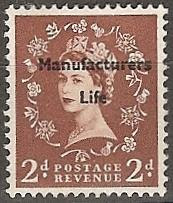 In 2002, Manulife–Sinochem Life Insurance Co. Ltd. was granted approval by the China Insurance Regulatory Commission (CIRC) to officially open its branch office in Guangzhou, China. Eight years later, Manulife-Sinochem was licensed to operate in more than 40 cities across China.

In 2003, Manulife Financial Corporation, John Hancock Financial Services, Inc., and Canadian subsidiary Maritime Life announced a stock merger of the companies creating a leading global insurance franchise. Completed in April 2004, the merger created the largest life insurer in Canada, second largest in North America, and fifth largest in the world at the time.

Manulife Financial is one of the largest life insurance companies in the world as measured by market capitalization and currently has approximately 24,000 employees world-wide.

By Paul Green
According to the Bonney and Lane Catalogue of GB Commercial Overprints: Banking and Insurance, the Manufacturers/Life pattern that is closest to the bottom of the stamp can be found with two font sizes (1.5mm or 1.7mm); the pattern that is centered on the stamp is found only with the 1.5mm font.
Posted by Michael Behm at 5:34 AM