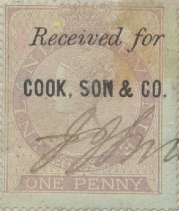 Cook, Son & Co. was one of the largest British wholesale clothing traders and drapers of the late 19th century and early 20th century.

William died in 1869. His son, Francis Cook, was head of the firm until his death in 1901. The company continued as a family business.

The company concentrated on warehousing and distribution rather than manufacturing. It employed Commercial travelers who exploited the recently built railway network to make sales by visiting retailers with samples of the products.

By Paul Green
Posted by Michael Behm at 12:13 PM