The company was founded by Joseph Lucas in 1860 with his son Harry, joining around 1872, aged 17. Initially called Joseph Lucas & Son, from 1882 it was based in Little King Street, later Great King Street, Birmingham. At first it made general pressed metal merchandise including plant pot holders, scoops and buckets, and in 1875 lamps for ships; later moving into oil and acetylene lamps for bicycles from 1879. In 1902, what by then had become Joseph Lucas Ltd., incorporated in 1898, started making automotive electrical components such as magnetos, alternators, windscreen wipers, horns, lighting, wiring, and starter motors.

The company started its main growth in 1914 with a contract to supply the Morris Motor Company with electrical equipment. 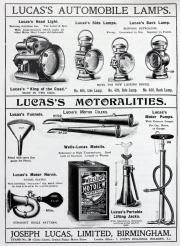 After the First World War the firm expanded rapidly, branching out into products such as braking systems and diesel systems for the automotive industry and hydraulic actuators and electronic engine control systems for the aerospace industry. In 1926 they gained an exclusive contract with Austin.

Around 1930, Lucas and Smiths established a trading agreement to avoid competition in each others markets.

During the 1920s and 1930s Lucas grew rapidly by taking over a number of their competitors such as Rotax and C.A.Vandervell (CAV). During WW2 Lucas were engaged by Rover to work on the combustion and fuel systems for the Whittle jet engine project making the burners, this came about due to their experience of sheet metal manufacture and CAV for the pumps and injectors. In the 1950s they started a semiconductor manufacturing plant to make rectifiers and transistors.

Starting 1996 Lucas was brought and sold by a number of companies this ended with Eltra Lighting Ltd acquiring the license from TRW to use the Lucas name on products in the UK and Europe, this purchase sees the familiar green and white Lucas name return to the car spares shops shelves again.

By Paul Green
Posted by Michael Behm at 12:44 PM