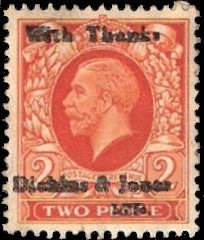 In 1790, Dickins and Smith opened a shop at 54, Oxford Street, at the sign of the Golden Lion. In 1830 the shop was renamed Dickins, Sons and Stevens, and in 1835 it moved its premises to Numbers 232-234 in the newly constructed Regent Street.

In the 1890s the business changed its name to Dickins & Jones, when Sir John Prichard-Jones became a partner.

In 1914 the business was bought by Harrods, as its first acquisition beyond its own original store. In 1919, the store acquired a new site, at 224-244 Regent Street, and in 1922 it moved into a new building designed for it by Sir Henry Tanner. In 1959, Harrods was itself bought by House of Fraser, but the subsidiary of Dickins & Jones continued to trade under its own name.

In 2005 it was announced that the Regent Street store would close, because high rents had made the store unprofitable since 2002 and it closed on 14 January 2006. The building was sold to Shearer Property Group and Delancey Estates for redevelopment into shop units with apartments and offices above. In October 2006 it was revealed that the new building was to have a glass extension with terraces built on top of the former store to make an 18,000 sq ft (1,700 m2) up-market restaurant and that the first, ground, and basement levels would house H&M and Nokia.

Following the closure of the Regent Street store, branches of Dickins & Jones at Epsom, Richmond, and Milton Keynes continued to trade under that name until 2007, when they were rebranded as House of Fraser stores. However, the Dickins & Jones name continues to be used by House of Fraser as one of its in-house brands for women's fashion wear.

By Paul Green
Posted by Michael Behm at 7:49 AM