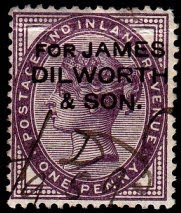 James Dillworth & Son was a textiles wholesaler and yarn agent based in Manchester.

In 1807, aged 17, James Dilworth became an apprentice in a cotton manufacturing company in Preston called Birley & Hornby. Dilworth proved to have an aptitude for the textiles business and he quickly rose to an important position in the firm.

In 1820 Dilworth decided to go into business for himself as a yarn commission agent in Preston. Dilworth would visit Manchester on the two market days in each week, and on the intervening days he attended the markets at Blackburn and Chorley. His business proved to be so successful that in 1837 he opened a warehouse at St. Ann's Street, Manchester, at the same time continuing with his operation in Preston. In 1838 James Dilworth admitted his son, John, into partnership and his firm took the name James Dilworth & Son.

In 1842 James Dilworth & Son closed down the Preston side of their business and concentrated their efforts solely on textile wholesaling in Manchester. James Dilworth died in 1854 and his son 4 years later. Subsequently two brothers named Jesse and Walter Haworth took control of the company, and successfully ran the business until the First World War.

By Mark Matlach
This pattern is also known on SG 219.
Posted by Michael Behm at 2:10 PM