The Direct United States Cable Company was set up in 1873 by Siemens Brothers to link the UK and the USA. It was found that with the core available at the time, the working speed of the cable would be too slow and the idea was abandoned. The new route was Ballinskelligs, Ireland - Tor Bay, Nova Scotia and Tor Bay - Rye Beach, USA.

The Tor Bay - Rye Beach section, 536 nm, was laid in 1874 by CS Faraday on her maiden voyage; Faraday also laid the 2565 nm main cable from Tor Bay to Ballinskelligs the following year.

This was the first cable to use Siemens' new design of a larger central conductor surrounded by multiple smaller wires. This arrangement packed more copper into the same volume, thus improving the signaling speed.

The Direct United States Cable Company came under the control of Anglo American in 1877, though it continued to operate under its own name. In 1920 it was purchased by the GPO.

In 1904, after the end of Anglo American’s monopoly in Newfoundland, the cable was moved from Halifax to Harbour Grace, having previously been moved from Tor Bay to Halifax. The company set up its office at Ridley Hall, the former home of Thomas Ridley.

When the cable interests of the Eastern and its associated companies merged with those of the Marconi company, this cable was transferred to the new company, Imperial & International Communications Ltd., which became Cable & Wireless Ltd., in 1934.

In 1943 the cable failed and attempts were made to repair it but they were unsuccessful It was not until 1952 that Cable & Wireless, using HMTS Monarch, was able to get the cable back into working order. This included laying 800 nm of cable between Porthcurno and Harbour Grace and a further 400 nm between Harbour Grace and Halifax. The cable to Harbour Grace was reopened for service on the 6th August 1952 and the Harbour Grace Halifax section opened on the 21st August. In 1953 HMTS Monarch diverted the cable from Harbour Grace to Middle Cove, around seven miles from St John’s, whence a landline connected it to the St John’s office. 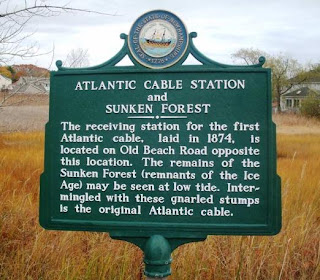 The cable station at Rye Beach closed in 1921 and the building was converted to a private residence. Today, a historical marker shows the location of the Sunken Forest and the cable station.