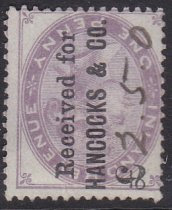 Hancocks & Co. is a retail jeweller and one of London's oldest specialist dealers, buying and selling rare and collectable jewels.

The company was founded on 1st January 1849 by Charles Frederick Hancock, who opened a shop on the corner of Bruton Street and New Bond Street in the West End of London. The business also had its own foundry and workshops where craftsmen worked to produce fine jewellery and silver. After only eight months in business, Hancocks received the Royal Warrant from Queen Victoria, who became a regular patron. Hancocks exhibited at the Great Exhibition of 1851 in London; this was followed by exhibitions in Paris and Vienna in 1867 and 1873, where Hancocks were awarded many prestigious medals of excellence.

The rapid expansion and growing reputation of Hancocks led to the company being entrusted with the design and production of the Victoria Cross on the inception of the award in 1856. This medal is the highest award for gallantry and is still made exclusively by Hancocks today.

By Mark Matlach
Posted by Michael Behm at 6:48 AM