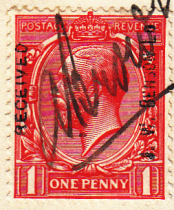 J.W Benson Ltd. made clocks and watches and also dealt in jewelery, diamonds, silver, and gold.

The business began as a partnership between Samuel Suckley Benson and James William Benson. From about 1840, they were selling watches under the name SS & JW Benson, Cornhill, London. In 1855 the partnership was dissolved, and from 1855 to 1897 the company traded as J.W. Benson and moved their premises to Ludgate Hill. The firm held royal warrants during the second half of the 19th Century, starting in 1876, for Queen Victoria, the Prince if Wales, the King of Siam, and the King of Denmark. 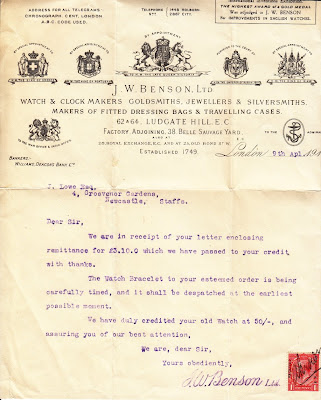 In 1889, Bensons opened a factory in Bell Sauvage Yard, Ludgate Hill, where watch finishing operations were carried out. Bensons made most types of clocks and watches, including office dial clocks, tower clocks, mantel clocks, pocket watches, chronometers, and wristwatches. The factory continued in operation until 1914, when it was bombed and 12,000 watches were destroyed. Following this disaster, J.W. Benson never made their own watches again. The company brought in all their watches and had the company name engraved on them, Bensons operating solely as a retail jeweler. 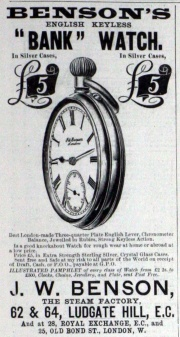 Advertisement 1896
There is very little recorded about the company from this time onwards, but it would seem that the original company sold the name to Garrards around 1973. By 1994 the name was part of the Mappin & Webb company and J.W. Benson acted as distributors for Ebel, International Watch Company, and Jaegar. In 1998, the J.W. Benson name was bought by International Watch Company and is now marketed by the watch and jewelery manufacturer, Chopard Ltd.

By Mark Matlach
Posted by Michael Behm at 4:52 AM