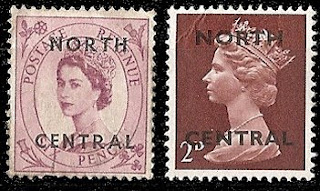 North Central was a hire purchase company that was established in 1861 in Rotherham as North Central Wagon Company, by a group of investors who wanted to lease wagons to railway companies.

North Central overprints can be found on the Wilding and Machin stamps. Unusually, the overprints are much more common on the 6d than the 2d denominations (the duty on hire purchase agreements and insurance policies was 6d).

By Mark Matlach
Posted by Michael Behm at 6:04 AM