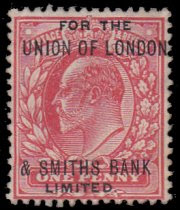 The Union Bank of London was established at 8 Moorgate Street, London in 1839; the bank assumed limited liability in 1882. Five years later, a new head office was erected in Princes Street. By 1902 the bank had 24 branches in London and its suburbs.

In 1902, Union Bank of London Ltd. merged with Smith, Payne & Smiths. The new bank was called Union of London & Smiths Bank Ltd. The bank expanded steadily and in 1917 there were 231 branches in operation.

By Mark Matlach
Posted by Michael Behm at 3:50 AM