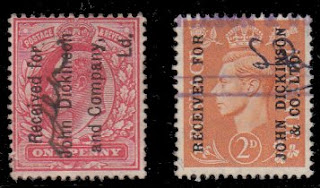 John Dickinson & Co. was a paper manufacturing business that went on to become a leading British stationery company.

The company was founded by John Dickinson in 1804 in Apsley, Hertfordshire. Dickinson invented a continuous mechanized paper-making process that he patented in 1809. He established paper mills at Apsley, Nash Mill, and Croxley in Hertfordshire. The river and canal at Apsley and Nash Mill provided power for the mills and transport for materials and product. In just a few years, John Dickinson & Co. became renowned for its production of tough, thin paper, which was used for Samuel Bagster's Pocket Reference Bible.

In 1830, John Dickinson patented silk-thread paper for bank notes and later adopted the technology for postage stamps. In Britain, the paper was used for the high value embossed stamps (1847–1854). 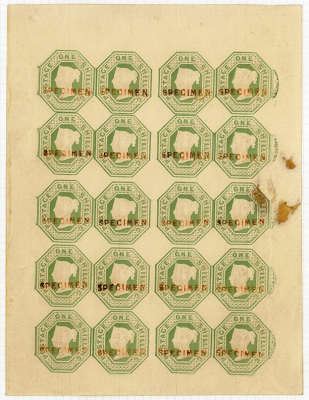 In 1850, John Dickinson & Co. started mechanical manufacturing of gummed envelopes for the first time. By 1876, the company was producing 3 million gummed envelopes per week. In 1858, John Dickinson retired, handing over the business to his nephew, John Evans. Dickinson died in January 1869 having refused to call in his doctor on the grounds that he was too ill to see anyone!

John Dickinson & Co. adopted the lion brand as the company logo in 1910 and, in the following year, the Basildon Bond brand was established, which by the 1930s had become the bestselling notepaper in the UK. From 1917-1930, the company expanded overseas; ultimately there was a network of manufacturing sites and sales offices in thirteen countries around the world.

In 1966, John Dickinson & Co. Ltd. merged with E. S. & A. Robinson Packaging, creating the Dickinson Robinson Group (DRG), one of the world's largest stationery and packaging companies. In 1990, Biber Holdings of Switzerland acquired DRG and the name of the company was changed to John Dickinson Stationery Ltd. In 2005 the company was purchased by Hamelin and restyled as Hamelin Brands and relocated to new, purpose-built premises in Suffolk in 2008.

by Mark Matlach
Posted by Michael Behm at 7:28 AM