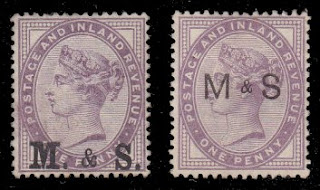 Marshall & Snelgrove was a department store situated on the corner of Oxford Street and Vere Street in London's West End.

The business was begun in 1837 when James Marshall, in partnership with a Mr. Wilson, opened a clothes shop at 11 Vere Street. The partnership was expanded to become Marshall, Wilson & Stinton. In 1848 when Stinton retired, John Snelgrove, an assistant in the firm, became a partner and the company's name was changed to Marshall & Snelgrove. The business grew and new premises were established in 1851 on the corner of Vere Street and Oxford Street. The new store sold a wide range of carpets, linoleum, soft furnishings and clothing. An air of exclusivity was cultivated by maintaining an on-site couturier workroom. 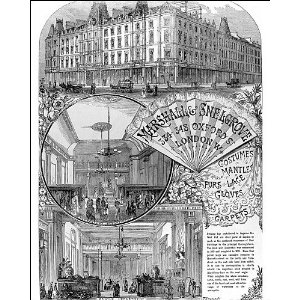 James Marshall retired in 1871. His son, James C. Marshall, and John Snelgrove continued with the running of the company. Marshall & Snelgrove opened branches in such fashionable resorts as Scarborough and Harrogate to enable their customers to shop whilst on holiday. Later, more branches were opened in Birmingham, Manchester, Southport, Bradford, Sheffield, Leicester, Leeds, and York.

Marshall & Snelgrove began to suffer financial losses following the outbreak of the First World War. By 1916 a working relationship had been established with Debenhams in order to preserve the business in the war economy. There was a full merger between the two companies in 1919.

Marshall & Snelgrove used the company initials to overprint their stamps. The overprints appear only on Queen Victoria stamps, although there are varieties in the positioning of the overprint, font type and the use of full stops.

by Mark Matlach
Posted by Michael Behm at 5:40 AM