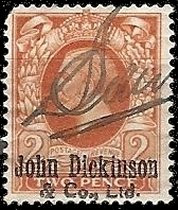 The company was founded in Apsley Hertfordshire in 1804 by John Dickinson, who invented a continuous mechanized paper-making process. In June 1807, Dickinson patented a method of paper-making that rendered his rivals' techniques (principally the Fourdrinier machine) obsolete.

Dickinson established paper mills at Apsley (a former flour mill), at Nash Mill (formerly a mediaeval corn-mill) in 1811, and at Croxley in Hertfordshire. The river and canal at Apsley and Nash Mills provided power for the mills and transport for materials and product.

The mill-house at Nash Mill, called Nash House, became the family home for Dickinson and his new wife Ann (née Grover) whose father Harry Grover supported this business development through his Grover's Bank. In a very few years, Nash Mills was renowned for its production of tough thin paper for Samuel Bagster's Pocket Reference Bible. A major fire in 1813 was a setback, but, being covered by insurance, enabled redevelopment towards large scale production.

During the 19th century, Sir John Evans and his son Lewis Evans (whose elder brother was the archeologist Sir Arthur Evans) both managed the company.

John Dickinson & Co. Ltd had their Engineering Department at Nash Mills until 1888, when it was transferred to Apsley Mill.

By the end of the nineteenth century, Nash Mill, which was small and had a reputation for independence, experienced a drop in profitability. Continuous minor changes were implemented until, in 1926, it underwent improvements with expansion, remodeling, and refurbishment.

The Lion brand was adopted as the company logo in 1910 and in the following year (1911), the Basildon Bond brand was established. Companies were then formed in South Africa, Australia, New Zealand and elsewhere (thirteen countries in all).

Dickinson Robinson Group Ltd (DRG) was formed in 1966, creating one of the world's largest stationery and packaging companies. In 1999, the company relocated from Apsley (Hertfordshire) to the village of Sawston south of Cambridge.

In 1999, the paper mills owned by John Dickinson in the Apsley area were closed and the land was sold and redeveloped. The mill at Nash Mills however was sold to the international Sappi Group and continued to make paper until 2006. This mill has been closed down and subsequently sold. Redevelopment plans for housing are being publicized in September 2007.

by Paul Green
Posted by Michael Behm at 6:27 AM