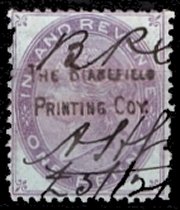 The Blanefield Printing Company was located in Strathblane, a small village in Stirlingshire, Scotland. The printing trade in Strathblane began in 1790, and by the 1850s the calico printworks employed around 400 people including 50 children. Employees worked 10 to 11 hours a day, 6 days a week. The Blanefield works had both machine and block printing. There was a dye house, a warehouse, a bleaching department and a drying department. The printworks had its own store and employees were expected to purchase all their groceries there. A man was posted at the gate house to see if any employee went into the shop opposite the factory, and if so they were fined. If times were hard at the printworks, the employees would be paid in goods obtained from the printworks store, thus tying them further to the company.

The Blanefield Printing Company was acquired by a syndicate of calico printers in 1898. The printworks was deemed unprofitable and promptly closed down. By 1910 the demolition of the works was practically complete and the population of Strathblane had fallen dramatically with a large number of houses left abandoned. No sign of the printing industry remains today.


by Mark Matlach
Posted by Michael Behm at 8:26 AM