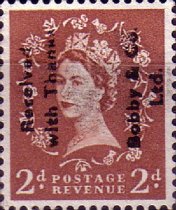 Bobby were a well-known English department store with branches mainly along the South Coast with 'outposts' in Southport & Leamington - generally well-heeled towns. They used the poster artist Gregory Brown on many occasions during the 1920s and 1930s such as this 1923 Christmas poster. 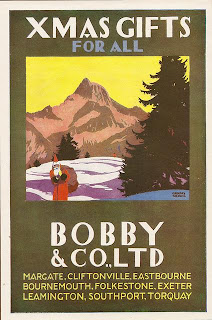 The history of Debenhams starts with a business opened in Margate during 1887, when a Mr. F. J. Bobby bought an already established drapery store. In 1900 it became a limited company and expansion followed through the years with stores in Leamington Spa, Folkestone, Eastbourne, Torquay, Cliftonville, Bournemouth, and Exeter. In Exeter, it was the business run by Green and Son on the High Street that was taken over by Bobbys in 1922.

When Mr. Bobby retired in 1927, the business was sold to Debenhams and his son became chairman of the group. Branches were added in Southsea, Reading, Worthing, Worcester and Totnes. During 1937, considerable improvements were made to the building and they became the largest store in the High Street. A restaurant was added with an in-house orchestra that would play during dinner and tea.


by Paul Green
Posted by Michael Behm at 7:17 AM