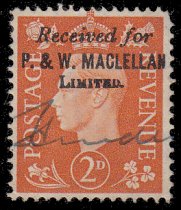 The origins of P. & W. MacLellan Ltd. date to 1805 when Donald and Humphrey MacLellan opened a hardware shop at 178 Saltmarket, Glasgow. The partnership was short-lived and in 1809 Donald set up on his own at 5 The Trongate, as Donald MacLellan, hardware merchant, specialising in supplying pedlars.

When Donald retired in 1839, he passed on the business to his nephews Peter and Walter. The company became P.& W. MacLellan. The firm began to diversify and manufacture its own products. In the Glasgow directory of 1846, P. & W. MacLellan advertised as ironmongers, smiths, gasfitters, and bellhangers. The company began iron merchanting in 1848 and started making iron bridges. Construction of the firm's first bridge across Glasgow's River Clyde started in January 1851 and was completed in June 1852.

Around 1852, MacLellans converted their works into an iron warehouse and purchased premises at 10 Adelphi Street in Kinning Park, Glasgow. They named their premises the Clutha Iron Works. In 1865 the company purchased the Clydesdale Foundry in Paisley Road. In 1890 the business became P. & W. MacLellans Limited. The company was now one of Scotland's most significant businesses, employing over 3000 people.

During the First World War, the Clutha Works were given over to munitions production and producing steel wagons and tracks for transporting goods to the Front. Following the war the business expanded, taking over the Forth Shipbreaking Yard in Falkirk, but the company was hit hard by the recession of the 1920s, the Clutha works only remaining open by accepting contracts at virtually cost price.

The Second World War saw MacLellans producing more munitions for the war effort and the building of landing craft at the Clutha Works. The company continued to grow after the war; pipework was supplied to various hydro-electric schemes in Scotland along with overseas bridge building contracts and repair work to war-damaged factories.

Competition with Japanese and German iron and steel producers meant that P. & W. MacLellan Ltd. began to suffer severe losses from the 1960s. Although the late 1970s saw the company back in profit, demand for fabricated goods was weak and the Clutha Works closed down in 1980. The company concentrated on supplying fastenings to the building and engineering trades. In 1997, P. & W. MacLellan Ltd. became Haden MacLellan Holdings Ltd., changing its name to Infant plc in 2000.

by Mark Matlach
Posted by Michael Behm at 8:36 AM