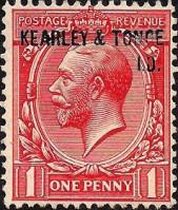 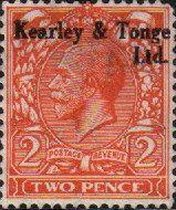 Hudson Ewbanke Kearley, son of a master builder was born at Uxbridge, in the county of Middlesex, in the year 1856. Educated at Cranleigh, H. E. Kearley had intended to enter the Civil Service, but failing to pass the necessary examination, he began a commercial career with a firm of coffee merchants in Fenchurch Street, London, on the 1st January, 1872.In September of the same year, he obtained a job with E. Tetley & Sons, Tea Merchants, of Mincing Lane. After experience in their office and sale room, he became, as he said, "a full-blown traveler of the firm" in the summer of 1874

About that time the main ideas upon which he subsequently based his commercial policy began to take shape in the mind of this astute and enterprising young man. He felt that "middlemen" had too large a part in the general scheme of distribution and that consumers would benefit by a method of direct supply. He noticed also while traveling in tea for Tetleys that--to use his own words--"there were a multitude of small shopkeepers who would have sold tea if they could get it. They could not, however, get it from the regular wholesalers like Tetleys, because they did not place big enough orders." 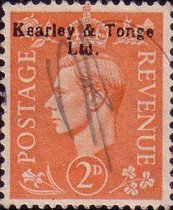 While still at Tetleys, he started to sell tea on his own account to small retailers, under an arrangement he made with Tetleys to purchase all his supplies from them. Thus began "Kearley & Company." It proved so successful that in 1876 a Mr. Heseltine, an influential member of Tetleys, offered to put money into the enterprise. That offer was accepted, a deed of partnership was executed, Kearley left Tetleys, and transfered "Kearley & Co., "to a poky little office at 10 Sparrow Corner, Minories, London, with a staff of two, a man and a boy--the man being Mr. H. J. Evans, afterwards one of the three Governing Directors. Two years later the business moved to better premises in Crutched Friars, again, in 1881, to Bury Street, St. Mary Axe, and finally in 1884, to Mitre Square. 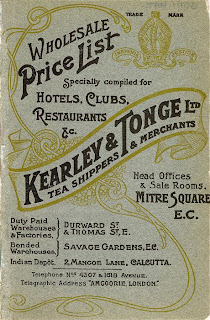 Such progress had been made that in 1880 Heseltine left Tetleys and became an active partner, when "Kearley & Co." became "Heseltine & Kearley". Soon afterwards, they were joined by Mr. G. A. Tonge who had been an apprentice at Tetleys. The business was carried on as "Heseltine, Kearley & Tonge" until 1887, when Heseltine retired and the style "Kearley & Tonge" was adopted.

The year 1878 saw the opening at Brentford of the first of the retail branches. Others quickly followed and it is recorded that from 1880 branch after branch was opened in town and country. The early branches traded under the name "International Tea Co." The price list dated 1st January 1889 which is the earliest on the files, shows that by that time there were 200 retail branches--a truly remarkable growth in approximately 10 years.

by Paul Green
Posted by Michael Behm at 7:51 AM