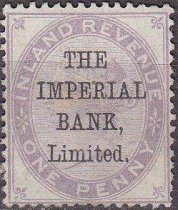 The following article was published in The London Gazette January 6th 1893:

That it is desirable to amalgamate the business of the Imperial Bank Limited, with that of the London Joint Stock Bank Limited, and accordingly, that the Imperial Bank Limited, be wound up voluntarily, and that Alfred Brown, James Dickson, and Edmund Theodore Doxat, be and they are hereby appointed Liquidators thereof, with power to any two of them to exercise all the powers of such Liquidators, 'and be and they are hereby authorized to enter into an agreement with the London Joint Stock Bank Limited, in the terms of the draft submitted to this Meeting, and to carry the same into effect with such (if any) modifications as they may approve, and generally to exercise for the purpose aforesaid all the powers vested in them by clause 133 of the Companies Act of 1862, and all or any powers capable of being vested in them by virtue of clauses 159, 160, and 161 of the said Act, and with full power to sanction the continuance of the powers of the directors of the Imperial Bank Limited, to such extent as the Liquidators may consider expedient.

by Paul Green
Posted by Michael Behm at 1:46 PM