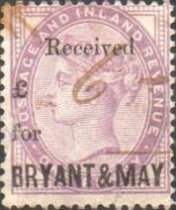 A partnership was formed in 1843 between two Quakers, Francis May and William Bryant, to establish a Provisions Merchants business in Tooley Street, London. In 1850 they started importing Swedish matches, produced by Carl and Johan Lündström. Their first order was for 10 or 15 cases of 720,000 matches (each case held 50 gross boxes, with a box holding 100 matches). The next order was for 50 cases; and later orders for 500 cases. This partnership was successful, so Francis May and William Bryant decided to merge the partnership with Bryant's company, Bryant and James, which was based in Plymouth. By 1853 Bryant and May were selling over 8 million boxes of matches per year; which was approximately 50% of the output of the Lundström brothers.

The company, Bryant and May, was founded with the specific aim of making only Safety Matches. They were influential in fighting against the dreadful disease known as Phossy jaw which was caused by white phosphorus used in the manufacture of the early matches.

They started production in 1861, on a dilapidated site in Bow which had once been used for the manufacture of candles, crinoline and rope. This site was gradually expanded as a model factory.

However the public were initially unwilling to buy the more expensive safety matches so they also had to make the traditional Lucifer Matches.

They were the target of the London match-girls strike of 1888, which won important improvements in working conditions and pay for the mostly female workforce.

To protect its position Bryant and May merged with or took over its rivals. These were:

Wilkinson Match's shares were acquired by US company Allegheny International between 1978 and 1980 with the company taking full ownership in 1980. In 1987, Swedish Match re-acquired the company. It later sold onto the Wilkinson Sword business, retaining the match business.

In the 1980s, factories in Gloucester and Glasgow closed leaving Liverpool as the last match factory in the UK. This continued until December 1994. The premises survive today as The Matchworks office complex.

The British match brands continue to survive as brands of Swedish Match and are made outside the UK. 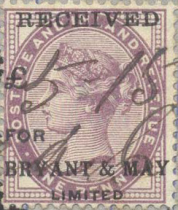 by Paul Green
Posted by Michael Behm at 7:14 AM