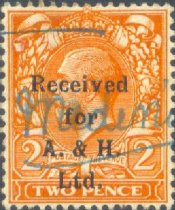 Allen and Hanburys Ltd. was founded in 1715 in Old Plough Court, Lombard Street, London, by Silvanus Bevan, a Welshman, apothecary, and Quaker. Bevan and his brother, Timothy, who became his partner and later succeeded him, were known for their just dealings and the integrity and quality of their drugs. The company grew in to a respected pharmaceutical centre and had established a strong reputation with American doctors by the late 18th century. The West Indies was also an important destination for their products.

William Allen, FRS, also a Quaker, and a well known scientist, joined the firm in 1792 and rose quickly to become the dominant personality. His second wife was a member of the Hanbury family - who had produced several learned scientists. On Allen's death, the Hanbury family assumed control of the company.

Daniel Hanbury, FRS a pharmacologist, and also a partner, was instrumental in making the name of Allen and Hanburys still more well known due to his correspondence with scientists all over the world. 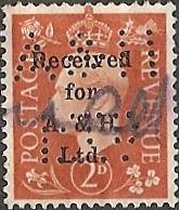 Growth of the company was continuous, but it was in the second part of the 19th century that developments on a large scale took place. Factories were built at Ware, Hertfordshire, and Bethnal Green in East London.

Allenburys claimed to be pioneers in Great Britain in the production of pastilles, and thus the Ware factory also produced Allenburys Glycerine and Black Currant Pastilles, amongst another 80 different kinds of medicated and crystallized pastilles. 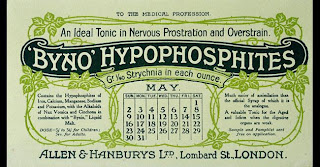 Malt preparations and malt extract were also made at Ware, including "Byno" preparations, malt extract with cod liver oil. Some appeared under the name of Allenburys Bynol, Torch, Brand Malt and Oil, often specially packed for chemists and other dealers bearing their own name and address.

Allen and Hanburys was one of the first manufacturers of Cod Liver Oil in Great Britain, and owned factories in the Lofoten Islands (Norway) as well as at Hull and Aberdeen taking cod directly from the North Sea.

The Bethnal Green factory carried much of the administrative and scientific side of the business. This included research, analytical control, chemistry, pharmacy and pharmacology. The Bethnal Green plant also produced surgical instruments, mainly in stainless steel, and included "Barts" operating tables. The company had overseas branches in Lindsay, Ontario, Durban, India, Shanghai, Australia and Buenos Aires, and agencies in many other countries. The Company address was for many years at 37, Lombard Street, London EC. 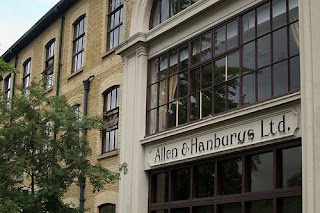 Allen & Hanburys launched the first selective B2-receptor agonist, Ventolin (that is,  salbutamol), in 1968. The drug was an instant success, and has been used to treat asthma ever since.


by Paul Green
Posted by Michael Behm at 8:46 AM