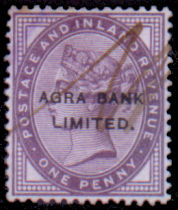 The Agra & United Services Bank was an Indian-based British overseas bank established in London in 1833. The bank was originally formed to cater to military personnel and government employees. The popularity of the bank increased steadily throughout India with branches opened in Calcutta, Bombay, Madras, Agra, Cawnpore, Delhi, Simla, Benares and Dacca.

In 1862 the Agra & United Services Bank merged with Masterman & Co. to form the Agra & Masterman's Bank. The bank became heavily involved in the financing of railway construction in Australia, however it collapsed following the banking crisis of 1866.

In 1867 the bank was resuscitated under the name Agra Bank Limited and continued for the next twenty years before going into liquidation in 1887. 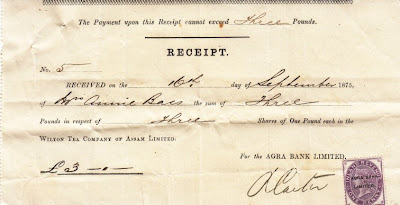 The Agra Bank Limited overprint can be found on the Queen Victoria Inland Revenue 1d stamp (shown on receipt) and the 1d Lilac stamp. 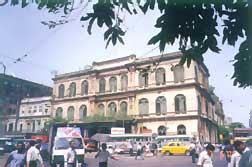 The Agra Bank building in Calcutta, now called the Currency Building and  occupied by the Indian Government's Currency Department


by Mark Matlach
Posted by Michael Behm at 4:23 AM