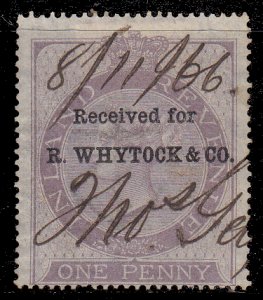 R. Whytock & Co. was a carpet manufacturing company established by Richard Whytock in 1807 at 9/11 George Street, Edinburgh. The original business of the company was making upholstery and decorative fringes for furniture. In the 1830s Richard Whytock became interested in the process of carpet manufacture which led him to invent and patent the Tapestry Carpet Loom in 1832. This was basically a new, mechanised method of weaving carpets with an unlimited number of colours possible. The carpets made using Whytock's invention were much more affordable to the general public and became known as Tapestry or Tapestry Brussels carpets.

In 1834 R. Whytock & Co. purchased a disused distillery in Lasswade and converted it into a carpet factory employing 100 people. It was here that the company produced Persian and Turkish style hand-knotted carpets. In 1838 Whytock received his first Royal Warrant from Queen Victoria and in the mid-1840s the factory was producing 10,000 yards of carpet per day. 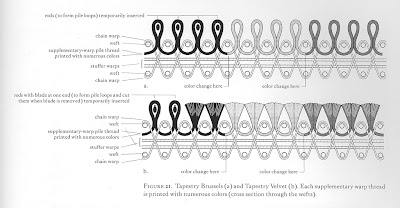 In 1846 Richard Whytock retired from the business in order to concentrate on the development of fabrics, leaving the company to his son Alexander. In 1876 Alexander Whytock became partners with John Reid, a successful upholsterer and cabinet maker, and the company became Whytock, Reid & Co. Alexander died six years later and was succeeded by his son William. However, William Whytock had no interest in the business and sold his grandfather's carpet weaving invention for around £7 million. Whytock, Reid & Co. continued to trade until 2004 as a furniture manufacturer and later as an antiques restoration business.

by Mark Matlach
Posted by Michael Behm at 6:11 AM