During 1854, six private banking firms in Basel, Switzerland, pooled their resources to form the Bankverein, a consortium that acted as an underwriting syndicate for its member banks. Among the original member banks were Bischoff zu St Alban, Ehinger & Cie., J. Merian-Forcart, Passavant & Cie., J. Riggenbach and von Speyr & Cie. 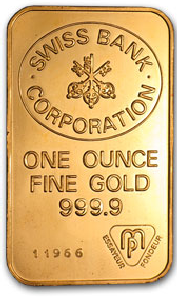 SBC continued to grow in the early decades of the 20th century, acquiring weaker rivals, but the onset of World War I put a hold on much of the bank's development. Although SBC survived the war intact, it suffered the loss of its investments in a number of large industrial companies. Nevertheless, the bank surpassed 1 billion CHF for the first time at the end of 1918 and grew to 2,000 employees by 1920. In 1937 , SBC adopted its three keys logo symbolizing confidence, security and discretion. The logo was designed by a Swiss artist and illustrator, Warja Honegger-Lavater.

Swiss Bank Corporation found itself in relatively strong financial condition at the end of World War II, with 1.8 billion CHF of assets, by 1947 SBC was shifting its focus back to its traditional business of lending money principally to private companies as part of the postwar rebuilding of Europe.

The following years were marked by a constant process of expansion supported by a number of aggressive acquisitions, this placed the bank in second place to UBS in the Swiss banking market.

Swiss Bank began the 1990s as the weakest of the "Big Three" Swiss banks but by the end of 1997 would be the driving force behind the merger with Union Bank of Switzerland. SBC had been impacted by losses on its real estate investments and a series of minor controversies, despite the bank's historically conservative posture.

UBS, the successor of the Union Bank of Switzerland, is among the largest diversified financial institutions in the world. As of 2010, UBS operated in all of the major financial centers worldwide with offices in over 50 countries and 64,000 employees globally.

The bank would grow considerably in the 2000s, building a large investment banking franchise to compete with the major U.S. and European bulge bracket firms. UBS suffered among the largest losses of any European bank during the subprime mortgage crisis of 2007 ~ 2009 and the bank was required to raise large amounts of outside capital from the Government of Singapore Investment Corporation, the Swiss government and through a series of equity offerings in 2008 and 2009.

by Paul Green
Posted by Michael Behm at 6:11 AM