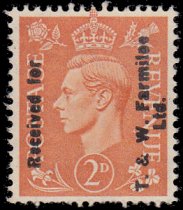 In the 1840s, two brothers named Thomas and William Farmiloe, set up a business as window glass cutters at Rochester Row, Westminster. A trade directory from 1859 describes the company as “window glass and lead merchants.” In the 19th century lead was a popular material in the construction of sanitary systems. (The word “plumber” is derived from “plumbus” the Latin word for lead.)

In 1885  T. & W. Farmiloe took over a lead works in Limehouse called the Island Lead Mills. The lead was used to make glazing bars, water cisterns and pipes. The company also had a large warehouse at Rochester Row, a brass foundry at Horseferry Road, a varnish works in Mitcham and another large warehouse at 88 Nine Elms Lane, Battersea. As lead became more problematic as a plumbing material, the company turned to other metals. The T. & W. Farmiloe 1886 catalogue lists an enormous variety of plumbing ware in lead, brass, copper, zinc and steel. 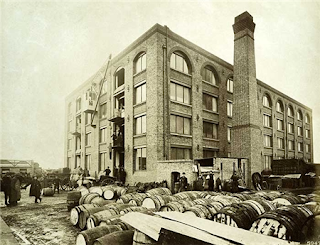 Exterior of the Farmiloe warehouse in Nine Elms Lane. Barrels of lead can be seen in the foreground.


By the end of the 19th century T. & W. Farmiloe had become a limited company. As the new century progressed, the manufacture of paint and sanitary ware began to dominate the business. “Nine Elms” white lead paint became a brand leader in the south east  of England by the 1920s. Other Farmiloe paint brands included “Father Thomas” and “Blackfriars”. The company also had a patent for a new mix of white paint which was used for road markings.

In the 1960s and 1970s, T. & W. Farmiloe Ltd. appear to have ventured into new markets, with several patents taken out for new types of sealant. Perhaps this new direction was not successful for the company as it was dissolved in 1988.

The Farmiloe overprints seem to be very scarce. The stamp shown in the scan (SG 488) is the only stamp issue I have seen overprinted by this company.