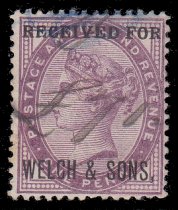 Welch & Sons was a straw hat manufacturing company established in the early 1800s. The company had a hat factory in the Bedfordshire town of Luton and a warehouse in London.

Historically Luton and the surrounding area was the center of the straw hat trade in England, producing a large share of all the womens' hats manufactured and worn in the country. In 1895 Welch & Sons was one of the most prominent hat manufacturers in Luton. The local trade directory of this year describes the company as a “manufacturer of straw hats, straw plaits and bonnets”. Most of the work in the hat industry was undertaken by women and girls. Luton gained a reputation as a place where men were kept by the women, the Luton Chamber of Commerce going so far as to produce a booklet in 1900, aimed at attracting new industry to the town by advertising the advantage of being able to pay men at low rates as the female members of the family were already employed.

by Mark Matlach
Posted by Michael Behm at 6:19 AM