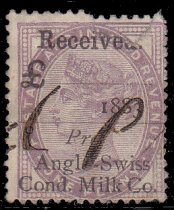 Prior to the mid-19th century, drinking milk was considered a health risk. Milk straight from the cow was loaded with bacteria. Milk not consumed within a matter of hours in the summer soon spoiled in the heat. Illness allegedly derived from contaminated milk consumption was referred to as “milksick”, milk poison” and the “milk evil”. The idea for a portable canned milk product that would not spoil came from an American called Gail Borden in 1852. His company began production of condensed milk in the United States in 1856.

The Anglo-Swiss Condensed Milk Company was founded in 1866 by Charles Page, the American Consul in Zurich, who had witnessed the success of Gail Borden's condensed milk business in his homeland. The company established the first European condensed milk factory in Cham, Switzerland, where large supplies of milk existed, although the bulk of the product was intended for England. Anglo-Swiss broadened its product line in the mid-1870s to include cheese and infant formulas. In 1881 the company opened a factory in New York and was soon competing successfully with Gail Borden in the United States.

In 1905 Anglo-Swiss merged with Nestlé, its fiercest competitor in Europe at this time. The new company was called Nestlé & Anglo-Swiss Condensed Milk Co. The company's current name of Nestlé S.A. was adopted in 1977. Today, Nestlé is a multinational nutritional and health-related consumer goods company and is the largest food company in the world measured by revenues.

The Anglo-Swiss overprint appears on the Queen Victoria 1d Inland Revenue stamp (type of 1868) and the 1d Lilac stamp (1881). 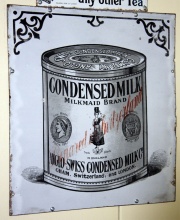 by Mark Matlach
Posted by Michael Behm at 4:32 AM