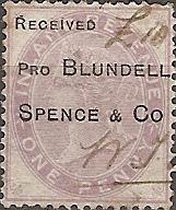 Blundell Spence and Company, paint manufacturers and oil seed crushers, was one of Hull’s most successful nineteenth century companies. Blundell’s Corner, today the home of the Hull Daily Mail, is named after the firm which once had one of its main mills on the site.

The founder of Blundell Spence was Henry Blundell. Although some accounts suggest he was born in Lincoln it appears that he was christened in Hull on the 23rd July 1787, the son of Mary and Thomas Blundell. He started his working life as an apprentice brush maker but by 1813, however, he was already making paints and four years later his operations were large enough to move into new premises near the corner of what became Beverley Road and Spring Bank.

The firm acquired the name of Blundell Spence when Henry entered into an association with his brother-in-law, William Spence, and was initially involved in both paint manufacture and oil seed crushing. Their business subsequently boomed, even though the original Beverley Road premises were destroyed by a fire in 1845 and had to be rebuilt. By 1848 Blundell Spence had also opened another mill on Wincolmlee.

The company’s fortunes were enhanced after George Dixon Longstaff moved to Hull around 1829. Longstaff practiced for a number of years as a physician whilst also sometimes lecturing on medical and chemical issues. He was one of the founders and first lecturers at the Hull and East Riding School of Medicine and Anatomy in 1833. He had a great interest in the practical applications of chemistry, and seems to have had much in common with Henry Blundell. Their working relationship blossomed some time after George married Henry’s eldest daughter, Maria, in 1833. 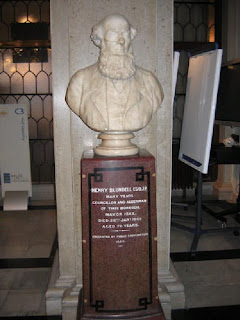 George Longstaff officially joined Blundell Spence in 1837 as head of London House and assisted his father in law before being made a partner in the business. He was soon resident in Hull once more and spent much of the rest of his life moving backwards and forwards between the town and the capital city. His scientific skills and judgement proved invaluable to Blundell Spence and the firm exhibited a range of goods at the Great Exhibition of 1851. By then the company was employing around 350 workers and exporting goods overseas as well across Britain and in 1863 Blundell Spence had an established capital of more than £150,000, a London office and had withdrawn from the seed crushing side of the business to concentrate on color manufacture.

Henry Blundell retired from the business in 1864 and was replaced as a partner in the company by his grandson, Llewellyn Longstaff, George’s eldest son. The firm continued to expand and in 1874 became a limited liability company with an authorized capital of £250,000.
George Dixon, another grandson of Henry Blundell became a director at this time. In 1889 a new company structure was incorporated with a capital of £400,000, then a staggering amount of money and the principal shareholders were all family members. The Longstaffs and their relations had become very rich but they had already introduced a modest profit-sharing scheme and in 1887 made the first Blundell Spence & Company: payments to staff, distributing £963 amongst 326 employees in Hull and London. By 1894 they employed 400 staff, the majority of which were based in Hull.

In the late 1890s British interest in the Arctic was renewed and there were moves to mount an Antarctic expedition.

Llewellyn Longstaff made a donation of £25000 to enable the expedition to start. Longstaff said this gift would give him the "peculiar pleasure to be able thus to contribute towards the advancement of our knowledge of the planet on which we live." Llewellyn's backing at this point was undoubtedly crucial.

The National Antarctic Expedition thus came into being. The funding it made it possible to order the construction of the Discovery, specially built at Dundee and launched in March 1901. Captain Robert Falcon Scott's appointment as leader had been confirmed in 1900.

In 1928 Longstaff was awarded the Founder’s medal by the Royal Geographical Society for his work in the Himalayas. In later years, he lived in the Highlands of Scotland where he died in 1964 at the age of 89.

In 1960 the firm of Blundell Spence merged with Permoglaze Ltd of Birmingham to form Blundell Permoglaze Ltd. and, after various changes, was bought out by Akzo Coatings, a division of the Dutch Akzo Chemical Group. The firm Akzo Nobel still (2008) work from the Bankside site purchased back in the 1840s by Mr. Blundell.


by Paul Green
Posted by Michael Behm at 7:57 AM