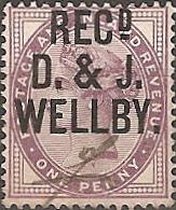 On 5th December 1827 Joseph Clement and John Wellby affected an insurance policy from 57 King Street, Soho, where they are described as refiners and jewelers with workshops. John Wellby, who appears to have taken over the business by 1834, is described in 1836 as having carried on a considerable business for some time as a refiner.

In 1841 he is listed at the same address as a gold and silver refiner and in 1852 as a gold and silver refiner and the proprietor of an exchange office. The firm was subsequently continued by Daniel Wellby and John Wellby at their 'manufactory', 57 King Street, Soho Square, later moving to 20 Garrick Street, Covent Garden, WC, where by 1897 they are listed as diamond merchants and wholesale jewelers and dealers in plate. 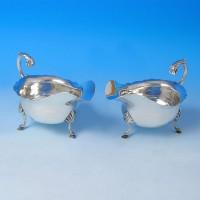 In 1896/7 the firm was converted into a limited liability company under the style of D. and J. Wellby Ltd. at 18 & 20 Garrick Street, WC, dealers in gold, silver, platinum etc., assayers, refiners, jewelers, and so on, with D. Wellby, J.H. Wellby, Edward Henry Wellby and Howard Wellby as directors. The directors are subsequently recorded as J.H. Wellby and E.H. Wellby, with H. Wellby as secretary. Remaining at Garrick Street until c. 1965, D. & J. Wellby Ltd. moved to corner premises, 30 Dover Street and 1 Hay Hill, W1, where they took over the business of Boswell and Ward, antique dealers. The business closed in 1973/4.


by Paul Green
Posted by Michael Behm at 8:01 AM