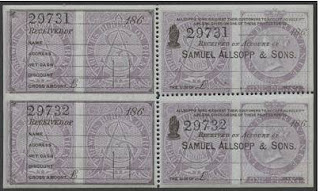 Samuel Allsopp & Sons labels make for a very interesting, though rather expensive, addition to a commercial overprint collection. In 1860 the brewing company of Samuel Allsopp & Sons was authorised by the Inland Revenue to use the current 1d Inland Revenue stamp se-tenant with a strip of three Allsopp labels, for the purpose of recording excise duties and issuing receipts. They were supplied in blocks of eight containing two such strips which were perforated vertically down the middle and horizontally through the right-hand block of four. The left-hand pair of the strip was overprinted in black with lines for entering the date, amount received in words and figures, the discount and the name and address of the customer, and this part was retained by the company. The corresponding right half was given to the customer as a form of receipt. Further details about the Allsopp labels can be found in Stanley Gibbons Great Britain specialised stamp catalogue volume 1.

The origins of the company go back to the 1740s when an innkeeper in the town of Burton-on-Trent in Staffordshire called Benjamin Wilson, brewed beer for his own premises and sold some to other innkeepers. Over the next 60 years, Wilson and his son and successor, also called Benjamin, cautiously built up the business and became the leading brewer in Burton. In 1807 Benjamin Junior sold the brewery to his nephew Samuel Allsopp for £7,000. After Samuel's death in 1838, his sons Charles and Henry continued the brewery as Allsopp & Sons. In 1859 the brothers built a new brewery near the railway station and by 1861 the company was the second largest brewer after Bass. In 1882 Henry Allsopp's son, Samuel Charles Allsopp, took over the business. The company was incorpoated as Samuel Allsopp & Sons Limited in 1887. Under Samuel Allsopp the company struggled and went into receivership in 1911. The company's capital was restructured and it continued trading. In 1935 Samuel Allsopp & Sons merged with Ind Coope Limited to form Ind Coope & Allsopp Limited. The Allsopp name was dropped in 1959 and in 1971 Ind Coope was incorporated into Allied Breweries.


Jon Evans notes that Allsopp also had receipts preprinted with overprints, such as this: 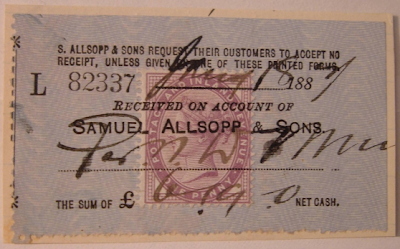