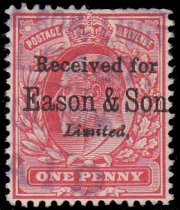 The company that is now Eason & Son was originally founded in 1819 as J. K. Johnston & Co., a newspaper and advertising agency based on Eden Quay in Dublin, Ireland. When the firm went bankrupt in 1850, it was taken over by W. H. Smith. In 1856 Smith appointed Charles Eason as his manager in Dublin. Born in 1823 in Yeovil, Charles Eason had served as an apprentice printer in Colchester before running Smith's bookstall at Victoria Station in Manchester. Eason's arrival in Ireland to run Smith's Irish operation coincided with a massive expansion of the bookselling and newspaper industry in Ireland due to the growth of railways, the emergence of national daily newspapers, and a growing literacy rate.

In 1856 Smith sold his Irish business to Eason who, with his son, set up his own company in the same year. Eason & Son grew rapidly with the addition of wholesale book and stationery departments, an advertising section and a circulating library. Eason's railway bookstalls became increasingly popular. By 1900, the company controlled most of the bookstall and newspaper trade in Ireland.

Today, Eason & Son Ltd. is a leading wholesaler, distributor and retailer of books, newspapers, magazines and stationery in both the Republic of Ireland and Northern Ireland. The company continues to be headquartered in Dublin and currently employs over 1,800 staff.


by Mark Matlach
Posted by Michael Behm at 5:53 AM