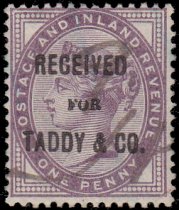 Taddy & Co was established in 1740 in London by James Taddy as a seller of tobacco, snuff and tea. By the end of the 19th century the business had grown to become one of the most important tobacco companies in Britain.


During the 1890s Taddy & Co. became well known for the excellence of their cigarette cards. The Taddy cards showing clowns, actresses and flowers have been nicknamed "the penny blacks" of cigarette cards by collectors. There were 20 "clowns" produced in the 1890s and despite being a relatively small set, there are only about 20 complete sets known in existence. In 1995 an incomplete set of 19 was sold at auction for over £10,000. Since then, this price has been far exceeded by a complete set of twenty. Another highly collectable Taddy series is a set of 25 which was issued in 1889 with the Myrtle Grove brand of cigarettes. They depict actresses and flowers and although not nearly as valuable as the Taddy's clown series, they still fetch in the region of £50 per card.

At the beginning of the 20th century Taddy & Co. was extremely prosperous. The owner at this time was Gilliat Hatfield. He believed in rewarding his employees well and ensured that their wages and conditions were superior to those of his rivals, dispensing with the need for any union representation.

During the 1920s  the cigarette industry went on strike and although the Taddy factory workers were already being paid more than the unions were demanding for the rest of the industry, they joined in the strike. Upset by these actions, Hatfield threatened to shut down the company if his employees did not return to work. The Taddy workers refused to back down and Hatfield carried out his threat and Taddy & Co. ceased trading.

by Mark Matlach
Posted by Michael Behm at 7:57 AM