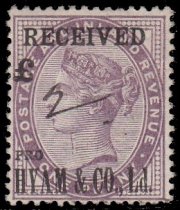 Hyam & Co. was a clothing manufacturer and outfitter at Oxford Street in the West End of London. The company also had branches in Birmingham, Wolverhampton, Leeds and Dewsbury. In the latter part of the 19th century the business was described as a hosier, hatter, boot and shoe manufacturer and a manufacturer of boys' and mens' suits. Hyam & Co. seemed to specialize in clothing for the military, producing caps, raincoats, boots, and service jackets for the Army.

Hyam & Co. overprints can be found on the two types of Queen Victoria 1d revenue stamps and the 1881 1d lilac stamp. 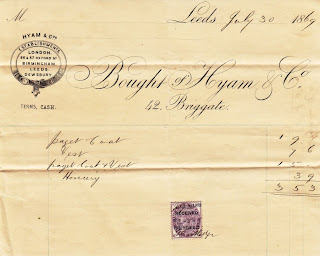 by Mark Matlach
Posted by Michael Behm at 7:49 AM