J.W. Campbell & Co. was a drapery business established in 1817 by brothers James and William Campbell at 5 Saltmarket in Glasgow. The brothers were initially financed by their previous employers, McLachlan and McKeand, who advanced the capital that enabled the new firm to begin business. McLachlan and McKeand remained as partners for the next few years. The company originally seems to have traded with hawkers, but soon branched out into general wholesale and retail drapery business. 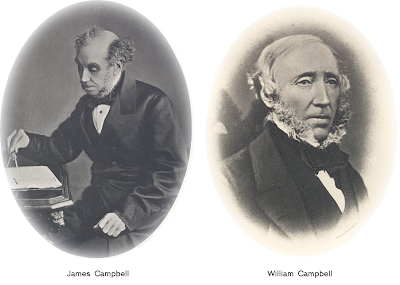 In 1823 J.W. Campbell & Co. moved to 34 Candleriggs Street. The wholesale department was on the ground floor, the retail department occupied the first floor, and the manufacturing departments were on the upper floors. The company continued to grow rapidly and moved to even bigger premises at Ingram Street in 1856. J.W. Campbell and Co. was by now a well established manufacturer and wholesaler of textiles in Britain with valuable connections in Canada, the West Indies, Australia, and New Zealand. 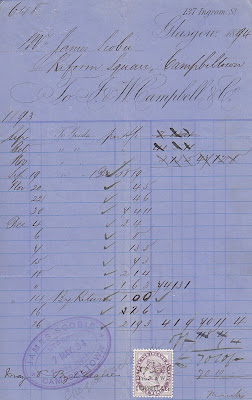 There are several minor variations in the Campbell overprints, all having to do with the size and placement of the letters in "Co".